Solitude.  Adventure.  Copper ore.  Whatever Louis Boucher hoped to find in the unexplored depths of Arizona’s Grand Canyon, it is now nearly as historic – unavailable – as the hermit himself.  With over 5 million people visiting this National Park a year, individuals struggle to abandon the crowds for a bit of Boucher’s peace and isolation.

Boucher, a mysterious figure from Quebec, came to the canyon in 1891 and staked out an existence as prospector and trail guide.  Boucher is noted as the only ‘white’ man to live permanently in the canyon, alone in Hermit Creek Basin.

We are one of a few hundred tourists today; but I – with my boyfriend, Hadyn, and companions James and Amanda – find our own humbling, awe-inspiring scenes by renting bikes and riding to an outlook named after the exploratory Canadian. 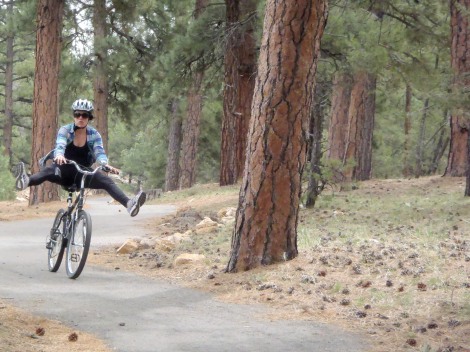 “Like riding a bicycle….” Muscle memory helps us along; after a few yards, Amanda is already confident behind the handlebars.

It never looks real.  Instead, the layers of color and soil, the unending crevices and unassailable cliff sides appear as a movie set. Cardboard backdrop, created by Walt Disney.

Bright Angel Bicycles rents the two-wheeled transport by the hour, half-day and day.  Following the yellow-coded lines snaking across the map, Hermit’s Rest Trail extends 10.5 miles along the South Rim and takes a suggested 2-6 hours.  We peddle along the roadside at times, stopping for the park’s busses.   For a few miles, our route winds uphill through low scrub trees and pine; then, we break out of the brush to views repeatedly calling for camera breaks.

Pondering a bit of information at Powell Point.  Helmets distinguish us from the busloads just like walking sticks distinguish the hikers.

No bicycles beyond this point.

Grand is an easy adjective; how can a five-letter word actually capture the magnitude of this natural landscape?

“I climb up the granite to its summit, and go away over rust colored sandstones and greenish yellow shales…I climb so high that the men and boats are lost in the black depths below, and the dashing river is a rippling book; and still there is more canyon above than below.  All about me are interesting geological records.  The book is open, and I can read as I run.”  -Louis Boucher, Aug. 18, 1869

As a Kiwi (New Zealander), James has incredible landscapes at home. This is, clearly, pretty epic in comparison.

Traveling with foreigners in your own country is like rereading a favorite children’s book: warm memories flood back, guided by a hundred new observations you  missed the first time.