“I actually planned the entire trip around this,” Chris confesses as we creep her vehicle through the parking lot of the Wigwam Motel.  Trucks and cars in light blue – a hue typically associated with polyester dress suits – sit in confused inactivity.  A 1940s Ford pickup, a 1960s Lincoln and a 2010 Escape confuse us.  Have we tripped back in time, or do the citizens of Holbrook, Arizona simply distrust modernity? 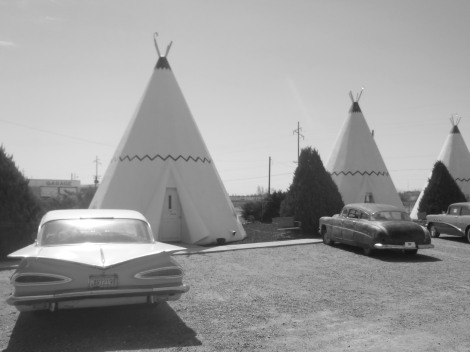 One of 7 original ‘villages’ across the United States, only 3 Wigwam Motels remain in use today.

A bit of both, I decide that afternoon.  The 1950s-built Wigwam Motel is not the town’s only vestige from a previous era: signs with light-bulb-outlined arrows advertise cheap rooms and unusual tourist distractions like “The World’s Biggest Collection of Decanters.”  Curios – of Native American and Chinese-make – are sold from paint-peeling shops.  In close connection with the nearby Petrified Forest National Park and Painted Desert, ancient rocks, geodes and plastic dinosaurs line roadside folding tables.  The gradual decline of Route 66 hasn’t dated this town; it’s been marking time since the Triassic period. 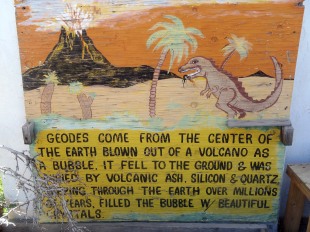 Rock shops are as common as saloons here…

“Route 66 brought dusty towns like Winslow and Holbrook back to life,” explains the information video at the Petrified Forest.  Folks making the journey from Chicago to Los Angeles came West in search of America, stereotyped by the Native America-styled dwellings of Wigwam Motel.  The peaks and poles have become so iconic, locals claim they’re the inspiration for Radiator Springs, the fictional scene of Pixar’s Cars. 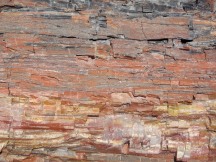 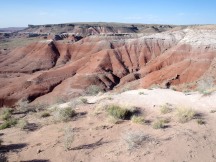 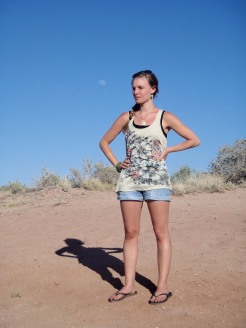 Moon over my shoulder…

Now, the kitschy white tee-pees of Wigwam compete with international chains.  But we don’t care how old Room #2 is.  For the price of an impersonal Super8 environment, we will sleep under fleece blankets covered with racing Mustangs (the horse kind) and wake up in a 60-year-old wooden bedframe.  Add cable, wifi and a vintage set of wheels, and I’ll dream peacefully of roadtrips past… 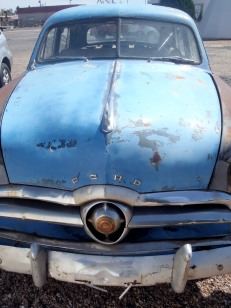 Tires of a long-departed guest. 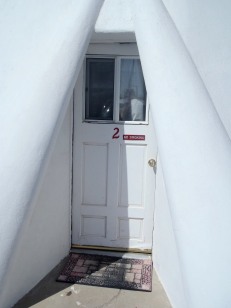 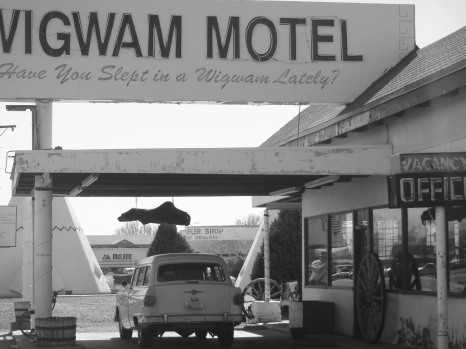 Have you slept in a Wigwam lately?

If you haven’t slept in a wigwam lately, book a room at http://www.sleepinawigwam.com/index.html

Next stop on our southwest American road trip: South Rim of the Grand Canyon.

17 responses to “Have you slept in a Wigwam Lately?”