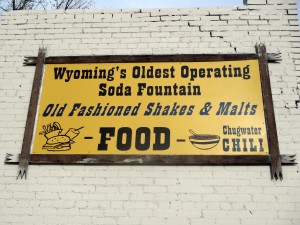 Chugwater, Wyoming; home of the “Best Chilli in the World.”

The clank of an old wooden door gave us away.  A tumbleweed, rolling between the five stunned locals, could not have looked more out of place.  Wading tentatively through frozen conversations and stares, we approached the vintage ice cream soda counter.

Deep in the cowboy country of Wyoming is a town so small that this one and only restaurant doesn’t even have a name- besides “Restaurant”.  Other than gasoline, there’s no reason a person would linger in Chugwater (pop. 212).  Unless they’ve seen the billboards, leading their tongues west to the “Best Chilli in the World.”

It’s an international claim the town’s made since 1986, when several ranchers upgraded the Wyoming State Championship Chilli recipe into the flood of beans, beef and spices now gracing every item on the menu.  Chilli-smothered hamburgers; chilli-drowned Polish sausages; chilli-buffeted nachos.

The Chugwater chilli “Restaurant”, built in 1914, has previously been the town’s liquor store, pharmacy and ice cream parlor.

While curious visitors can stop by the corporate office for a free sample, I think the 98-year-old dining room and unabashed gawks of residents make for a better meal.

Several hand-baked fruit pies were cooling on a table near the bathroom, where a list of user instructions included “Be a sweetie, wipe the seatie.”  A taxidermy elk watched over the chilli vat, which appeared to be the original 1914 model

“Greatest chilli in the world- besides my mother’s,” my boyfriend threatened to write in the guestbook.  Was it – is it – the most amazing chilli in the universe?  Or is chilli, like a good bbq sauce, the sort of thing we always think our own family makes best?

It was, at least, the tastiest  roadside pit-stop I’d had in a very, very long time.

Though Chugwater sells a seasoning mix, the secret ingredient behind the chilli’s popularity remains a mystery.

5 responses to “Flavor of the Week: Chugwater Chilli”