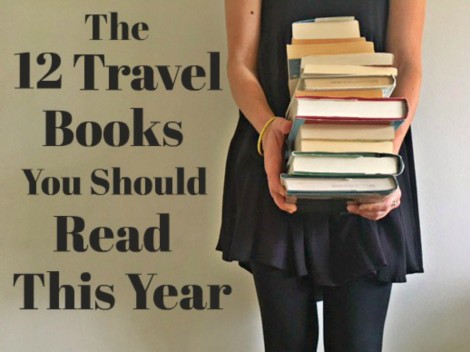 Long before Iceland’s “Yule Book Flood” caught on in the States – long before I realized there was an entire country that celebrated Christmas with a symbolic tsunami of reading materials – books were my go-to gift.

It’s now reached the point where I must wrap creatively to maintain an element of surprise. Because nothing says “I know and love you” better than a hand-picked book.

Hence I give you these: each a favorite from last year that involved some sort of movement – or moved me, in some way. If you only read 12 things in 2018, than I hope these travel books contain enough wonders, dreams, worries and adventures to carry through the calendar.

In no particular order (it’s a flood, after all):

If you haven’t read the world through a YA travel book, consider this an “X-marks-the-spot” start. 10,000 Madonnas encapsulates the elation, frustration and dramas of a first trip abroad, as five semi-strangers uphold their dead friend’s request to explore Euopre and find his estranged mother. Flawless dialogue aside, the group’s quest turns into a bizarrely relate-able experience; wouldn’t you go to the ends of the earth for someone you loved?

Following up on How To Be Canadian, Ferguson reminds us just how quirky his native land can be. In a country where 90% of the population supposedly lives within 90 miles of the border, the author seeks out pioneers, their remote outposts and the legends they live by. From polar bear wranglers up north to a ship-building dreamer on the Saskatchewan prairie, these folks are your introduction to a whole different Canada. (Shared, delightedly, with a proud pinch of Canuck sarcasm).

A passport isn’t always a gift, it’s a privilege. In this non-fiction account, journalist Helen Thorpe traces the paths of four Mexican high-school students: two born legally in America, two brought over illegally by parents. The country’s immigration policies fall under sharp scrutiny when experienced through the lives of these teenagers. Challenging popular stereotypes, Just Like Us is an eye-opening account of human migration and the complexities of man-made geography.

Connelly lands in Yangon, Myanmar with plans to write a series of articles about the political situation. Drawn to the civilian democratic movement, she soon joins the 1996 student demonstrations. A relationship develops between herself and an ethnic Karen separatist leader, letting us witness another side of the conflict: jungle camps and malaria pills, international aid and a love story that is just as haunting as Myanmar itself.

If people ask me about the Native Americans of South Dakota, my answers are (at best) vague and under-informed. So I celebrate this book and the fact that it educates, with no pretense of polarizing readers. When Nebraska resident Bunelle uses the long Easter weekend to road trip from Alliance, NE to Pine Ridge Reservation, it’s an excuse to revisit his own history, and that of the peoples who consider this region home.

The Book of Speculation – Erika Swyler

Have you ever read a book that strikes so intensely, you wish everyone owned a copy? (A book so enthralling, you instantly distrust anyone who disliked it?) Swyler’s Book of Speculation tears at the imagination, its plot lingering long after the last page has turned. Blending Eastern European folklore, traveling circuses and a mysterious family curse, this multi-generational story slips magic into the most unlikely places.

Dog of the South – Charles Portis

It’s difficult to make fiction read like a travel narrative. But if I didn’t point out Portis’ made-up story, you’d never guess it wasn’t the true tale of unambitious Ray Midge, who trails his runaway wife, her lover – and most upsetting, his Torino – down to Belize. Stalled by mishaps and uninvited companions, Midges gets lost in the journey. Does he win back his wife or locate his beloved car? Does the destination ever really matter in the end?

When a New York Times food critic becomes too recognizable to write an honest review, she dons a wig and dines undercover. If, like me, you typically travel through your taste buds, then this autobiography-cum-compilation of reviews whisks together like an expedition in dining. When it comes to the city’s top-rated restaurants, Reichl’s obsessive palate makes the perfect traveling companion.

The Book of Wanderings – Kimberly Meyer

Written by a woman who sacrificed her dreams for an unexpected child, Wanderings is a pilgrimage for mother and daughter. Tracing the Medieval route of a famed Dominican friar, the pair visit Italy, Cyprus, Israel and Egypt. Their relationship is, of course, tested by personal issues and public interactions. Yet Meyer’s ability to describe her experience against the context of other spiritual writers and pilgrims leaves everyone reveling in travel’s greatest gift: self-discovery.

This Poppy Loves Book Club pick can easily trick readers: the plot’s too insanely detailed to be non-fiction, yet it features far too many real people and events to be imaginary. Either way (I won’t spoil the story), The Hare traces a family heirloom from ancient Japan, through Paris and on to post-WWII Austria. Proust, Hitler and the Rothschilds make appearances in this addictive depiction of art and memory.

On the back book cover,the 2011 edition of this 1932 hit claims that Christie is ‘the most widely published author of all time.’ So ignore the fact that this mystery, condensed into the sleeping cars of a cross-European train, has been made into two different films. Instead, read your way through one of the world’s most famous “who-done-its”, from the discovery of a dead body to the interrogation of 12 very unusual passengers.

Another book that’s been redone in movie form, Taliban Shuffle (film-titled Whiskey Tango Foxtrot) highlights the chaotic world of international journalism. As a woman posted in Afghanistan and Pakistan, Barker must learn new languages, interview techniques and methods of survival. Against all expectations, this alternative lifestyles becomes a sort of drug – and her memoir is the honest reflection of a foreign correspondent who couldn’t get enough.