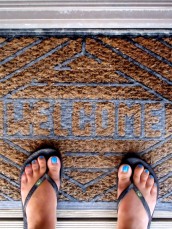 “No one realizes how beautiful it is to travel, until he comes home and rests his head on his old, familiar pillow.”

Mom stands behind the red security cordon until she can no longer see my shoulders, the house-in-a-backpack they carry. One hand waves determinedly, too busy affecting this farewell gesture to wipe away tears.

Because it doesn’t matter how far I go, nor how often, this will always be my final image of home.

I suspect most of have a similar goodbye picture. And maybe we’re typically the ones departing, too fixated on imaginable adventures to really lose ourselves in nostalgic bawling at the departures lounge. But in order to leave, you have to come back eventually. So next time you’re aching for a welcome hug or the familiar feel of that old worn mattress, let this travel playlist lead you back . . .

Sloop John B – The Beach Boys

Sometimes, you’re ready to go home. Maybe the weather sucks, our heart is breaking, paradise isn’t everything they promised it would be. Make like the lyrics from this legendary foursome and “call for the captain ashore, let me go home.”

Other times, the glamour of the road (and a good rock and roll song) turn a short holiday into a lifestyle choice. But deep down, you know bright city lights and big 747s will only replace the comforts of home for so long.

Whatever the reason for your return, kick off the journey with Grammer’s anthem to prodigal children. “We won’t forget where we came from/ the city won’t change us/ we beat to the same drum.”

How can you possibly top the poetic harmonies of Simon & Garfunkle? What describes the ache of homesickness better than a moment where your thoughts escape to that place you belong, that place where music is always playing?

It’s no wonder Philips’ guitar tune was adopted by numerous commercial campaigns; from the upbeat chords to the reassuring chorus, it’s sure to run on mental repeat for weeks. Which is, hopefully, the longest it will ever take you to reach home.

When this Kiwi legend “bids you welcome” from the bottom of his heart, it’s impossible not to accept. “See I made a space for you now . . .” Wherever you are right now, may you feel strength and shelter until your real home appears on the horizon.

“. . . if you’re feeling alone/ instead of whining and moaning/ just get on the phone/ tell her you’re coming home.” When true love is involved, miles aren’t even worth counting.

To the Stones, the distance been here and home can feel like a season when the nights pass slowly. “Oh I’m sleeping under strange strange skies/ just another mad mad day on the road/ my dreams is fading down the railway line.”

Again, the place you feel most comfortable doesn’t have to be a place at all. To Jade and Alexander, its the relationship between best friends and lovers. When you’re lucky enough to travel with a boyfriend or girlfriend, you get the best of all worlds.

Under The Tracks – Creeper Lagoon

This is one for the escape artists, who flee home because it’s too tame or too boring. Freedom is fine for a while, but we all get lonely at some point.

Fortunately, if you do escape the safety of your hometown, there’s no rule saying its permanent. “Who says you can’t go back?/ Been all around the world and as a matter of fact/ there’s only one place left I want to go…”

When I Die – The Waifs

A fitting tribute to the end of our wide and wild lives – and to the end of this playlist. “Now seasons change and I’m still the same/ I don’t belong to anyone/ Still a piece of me will always be/ sitting in my hometown sun.” In this traveler’s prayer, the Australian folk duo makes no apologies for their nomadic movements, but ask to be buried in the town where they came from.

Which songs make up your homeward bound playlist? Let me know which tunes I’m missing.

Not heading home quite yet? Keep traveling with this playlist for an American road trip . . .

3 responses to “My Heart Keeps Calling Me Backward: Travel Playlist For The Homeward Bound”