This month’s armchair literature review: the first of 10 titles from Longitude’s Best Travel Books of 2013. 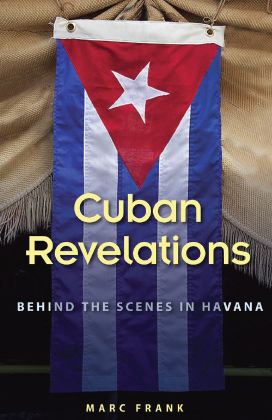 “Everyone always loves Che, but I’m trying to convert them.”

Curious to the point of obsession, my flatmate devours biographies and fictional histories, printed interviews bigger than a Bible and Fidel’s own heated publications. After reading about the Cuban leader, Michelle will visit his small but proud Caribbean country. And while she’ll travel with more knowledge than most, few books will help her accept those upcoming experiences better than this one.

Cuban Revelations – Behind the Scenes in Havana – Marc Frank, 2013

From the fall of the Soviet Union (and its subsequent influence in Cuba), through the proceeding decades of governmental transition between Fidel and his brother Raul, Frank recounts the political and economic developments that have reshaped this island nation.

Marrying a local and raising his children here, Frank’s observations are made with the interest of an outsider and the healthy realism of a citizen. He gives special attention to U.S.-Cuban relations, candidly recording a quarter century of trial and error.

The book is a blend of travel narrative and journalistic commentary, with sources cited, credits quoted and personal experiences described in just enough detail. This style infuses the pages with confidence and authority. Even when the reading gets stuck in technical references, Frank’s honest version encourages you to see things through ’til the end – much the same feeling he subtly encourages you to keep toward Cuba.

Why this title made the list: You could liken Cuba to Myanmar: that still-untrampled country, with stringent visa requirements, a complex history and international outcry over the dos and don’ts of visiting. The average backpacker cannot enter either country without warnings on safety, human rights concerns, nefarious Western influences and dictatorial regimes.  Yet both sets of borders protect rich cultures and citizens hopeful for change.

Luckily, Frank’s Revelations will not only bring the reader up to speed on the most recent political and economic developments, but establish a better (and nonpartisan) comprehension of Cuba’s history.

Plus, for those of North American descent, this book does what few other Cuban tales have done before: challenge the preconceived stereotypes of Fidel as a demonic, ruthless ruler.

Why it’s relevant to travel in 2014: As the changes within the country allow for further foreign investment and travel (though Americans face a few extra hurdles in the visa application process), more and more visitors will drift in. Foreign dollars will be spent, tourism will increase and, with it, slowly replace all those iconic images we apply to the mysterious country. Cuban cigars will cease to be a unique commodity, and those big, pastel-colored vintage cars will disappear from the streets.

So now is the time to go; it’s just not the time to go without some basic background research. Follow the example of Fidel – an avid reader himself – and let a little bit of self-education guide your future movements.

One response to “Longitude’s Best Travel Books of 2013, #1: Cuban Revelations”