“I haven’t eaten anything green in…maybe…weeks?” James counted back through the previous meals he’d had in Canada, adding up the hours of absent vegetable dishes.

“It’s the weather,” Sal suggested.  With some of the highest snowfall records in the country, this region of British Columbia tempts us towards thick, hearty dishes that do less to slim down and more to warm up.

But it is also the culture of Scandinavian and Western European settlers: sturdy pioneers who could not grow lettuce under a 4-foot snowbank.  Potatoes, slabs of red meat, these are ingredients that worked through winter hibernation, until the thaw of spring would support new seeds.

I blame the poutine, and it’s greasy, dripping, gravy-slide representation of edible Canada.

So when a group of American ski fiends – friend’s of Sal’s – arrived from Tahoe, we opted away from a nutritious spinach salad and attempted to make our own.  The new year’s diet never stood a chance against this heartburn monster. 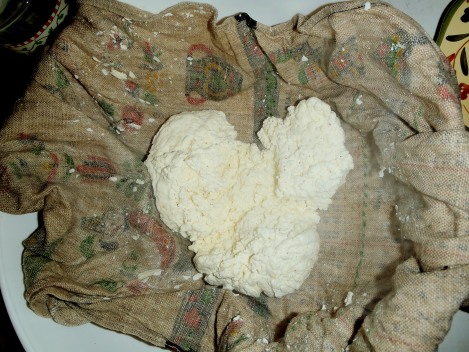 Our handful of homemade cheese curds, sieved through a tea towel.

A plate of messy, napkin-in-neckline inspired, caloric goodness!  We can always eat an apple tomorrow, eh?  When a location offers you something as new and filling as this,  why not eat richer and relish it!

Be warned: the Guinness of dinners, this overwhelming meal is guaranteed to induce short-term food coma.

New Year’s Resolution #3: Worried about breaking this?  Ration your healthy foods and splurge once a week on something unusually delicious.  After all, this year will be over in a mere 345 days…

One response to “New Year’s Resolution #3: Eat Healthier/ Diet (That Is, Eat Richer/ Relish It)”