Pavlova is an Australasian dessert requiring patience and careful kitchen skills. Eyeing up my first (deformed) baking attempt, I wonder where I went wrong. . .

The perfect Kiwi woman knows the tricks of a perfect pavlova: use a clean whisk and never skimp on time or ingredients.  I – being only an immigrant, unlearned in the ways of the native kitchen – cheated with 5 minutes, $4.95 and a premixed Edmonds Pavlova Magic.

Both Australia and New Zealand claim pavlova as their national dish. To understand the amicable but uncompromising battle for the dessert’s origins is to understand a bit of the unending rivalry between both countries. It’s the joke that never dies – or the dish that people will, literally, fight for. (Forks may stay on plates, but words fly like sugar bullets). 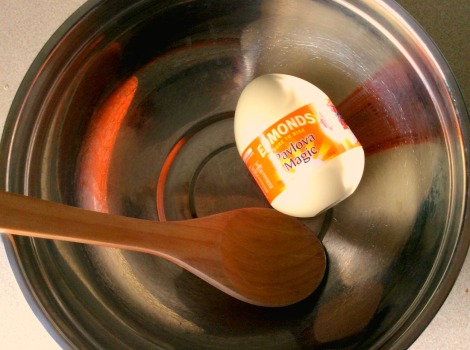 The uncontested facts: In the 1920s, esteemed Russian ballerina Anna Pavlova toured Australia and New Zealand. The delicate meringue-based dessert is named in her honor.

The Kiwi-claimed rumor: A Wellington chef, inspired by Anna’s tutu, turned the traditional meringue into a crusty cake with soft interior and dedicated it to the famous dancer.

Everything you need to whip up your own pavlova is contained in one foil sachet. In local lingo, this should make the whole process “easy-as.”

The recipe: Beat egg whites, fold in caster sugar and slow bake, then top with fresh fruits, such as strawberries, kiwis and passionfruit.

The result: Edmonds Pavlova Magic mix takes the stress out of creating an iconic Kiwi dish. But it doesn’t come with everything you need – like a Kiwi boyfriend to kindly point out that by opening the oven door during baking, you stifled the desert’s rise to perfection, and will be crunching through pavlova wafer for the next there days. . .

What new flavor have you tried this week?

2 responses to “Flavor of The Week: Pavlova”

Leave a Reply to Too Mutch For Words Cancel reply