It was not how I expected to spend my last English class: clustered into a darkened bedroom with the students, watching Korean Pop TV on mute, and anxiously hoping Thai officials would not discover the five young women hiding with me.

When school staff received a cellphone call, warning of the impending raid, all physical signs of life were removed from sight: our shoes on the front steps were thrown inside; clothing pulled off the line; motorbikes pushed around the side of the building.  My class crept anxiously up the stairs, careful not to appear above the open railing. 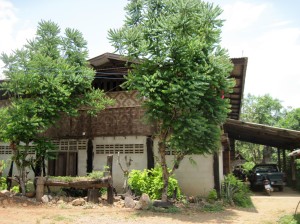 Our unassuming school building/house could be one of a hundred typical homes in any northern Thai village.

“Are you ok, Teacha?” someone would ask at intervals.  I was fine; if caught by immigration, I’d simply play the role of naive tourist and be on my way.

But my students could not.

Because Thailand never signed the 1951 UN Convention on the Status of Refugees, and thus does not legally accept individuals with refugee status, the more than 140,000 people who’ve crossed over from Burma are not allowed to live in the country.  Technically, they do not exist.

Therefore, my school is simply a “village house”; my job is nothing more than “friendly stranger”; and “No, officer, I’ve never met those young Karenni women in my bedroom before.”

We stayed in that room for two hours, stretching our limbs only after another “all clear” call came through the phone.

Travelers should be aware of this situation when they visit the western and northern regions of King Bhumibol’s country.  While His Majesty’s government has worked hard to provide assistance to development organizations and cooperate with refugee groups, they remain a population of ghost peoples, trapped between the Burmese border and the sunnier stereotypes of the Land of Smiles.

The UN High Commission for Refugees’ Map of operating Burmese refugee camps along the Thai border.

From Mae Sot, stretching up to the border crossing at Mai Sai, foreigners will encounter numerous check-points manned by Thai soldiers.  All natives and citizens must carry state-issued ID cards.  Caught on public transport without this, refugees can be fined, jailed or deported.  They are not supposed to own vehicles or move beyond the gates of their temporary camps.

Though foreign passports are rarely even glanced at, such stops are a frequent reminder of the limited rights of refugees.

For these reasons, travelers should never expect to visit a refugee camp.  Entry and exit is strictly controlled, and even nonprofit workers must apply in advance to visit the areas.

However, the past decades’ influx of immigrants, both temporary and permanent, has influenced the region in more positive ways, creating a unique cultural mix that is visible in towns along the border.

Travelers can cross into Burma at Mae Sot, Thailand; I buy a juice from a Burmese vendor operating behind the tentative barb wire border.

If you’re interested in better understanding and/or living in these regions, check out the Burma Volunteer Program.  This is the volunteer program that placed me as a teacher with Karenni refugees in Mae Hong Son.  The agency has hundreds of placements with schools, news agents, community-based organizations and non-profit groups, all that serve the needs of Burmese refugees.

4 responses to “Thanaka Cheeks: The Impact of Burmese Refugees in Thailand’s Land of Smiles”