If your government (local or national) accomplishes one thing in 2013, what would you like that to be?

I realize my demand is trivial; that your legislative calendar might be better spent controlling the public consumption of soft drinks, erecting bigger  walls above the Mexican border, or clinging to those deflating clouds of hope above the Fiscal Cliff.

Yet if you could first consider this small, simple request, I sincerely feel your legacy would be secured.

It’s a matter of paper, really;  printed paper, a few staples and glue, and that fancy stamp with the bald eagle flying boldly.  You see, while most other countries publish their national passports with 24 pages, ours contain a mere 12.  And though the absence of these pages has yet to cause the death of any citizen, I assure you – emphatically – that it is killing our ability to travel.

Naturally, no Yank has ever done this before (left the country for any reason other than a draft-dodge to Canada), which is why you never pondered creating a larger document.  (Why you never considered a wall up there, too, is something I’ll discuss in my next letter.)

But at some point in the future – 2013, say – we, as a nation, just MAY want to go somewhere.  For fun.  More than once.  For longer than a week.  And what happens then, dear Leader? Anarchy and chaos, and a lot of unused suitcases.

So, really, what I want for 2013 is not just a bigger passport for my fellow citizen.  I want you to recognize that we are but a small part of a massive sphere, and will  no longer be constrained by your inability to appreciate this.  Give us more  more pages, more opportunities for exploration!

Or I will – and this is a serious threat – utilize my freedom of choice to move to New Zealand.  Where everyone gets 24. 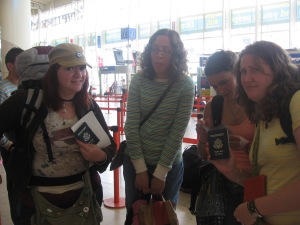