Over 170 countries celebrate this day of advocacy and action: does Burma?  I don’t know.  Inside the country, this was a common sight: 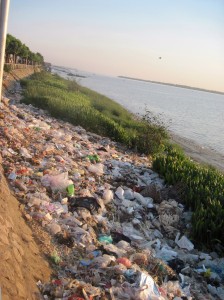 Mounds of garbage that showed no indication of biodegrading anytime soon.  “Is concern for one’s environment not an inherent trait?”  I wondered often.  And yet, we trekked through villages in the northern states that had just received electricity in 2010.  Powering a house?  Possibly more important than placing rubbish bins around the city.  Allowing citizens a fair and honest vote?  Probably more pertinent than installing power lines.

On the hierarchy of needs, where do environmental concerns fall?  How does a country fix all these problems, without creating a state that over-produces, over-consumes and under-appreciates?  What do you think?

One response to “Earth Day, April 22: A Question for Developing Countries”