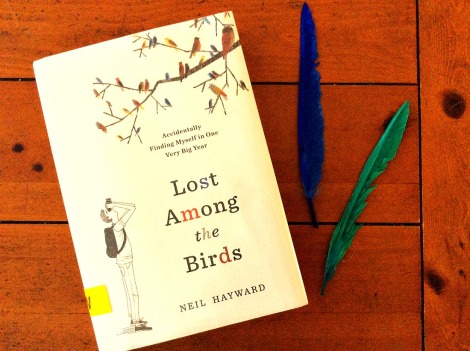 If you’re like me, you deliriously cling to a new year’s optimism until February; when suddenly, you notice you’re still merely brainstorming resolutions. The future looms, you’re inactive, and it’s terrifying.

This feeling of having fallen off the path is exactly what Neil Hayward expresses in his unintentional memoir, Lost Among The Birds. And it’s also the reason anyone who wants to find themselves this year should read the book.

It might help if you have some interest in wildlife – or birds, to be specific. Because Hayward is a birder: someone who stalks and studies feathered creatures in the wild. The hobby (or, as many would argue, occupation) involves an insane amount of travel and was popularized by the 2011 film, A Big Year.

Hayward only feels a sense of purpose when he’s out locating birds. 39 years old, recently unemployed and barely into a new relationship, the author believes his options are running out. Soon it’s the end of February, and friends demand to know, “What are you going to do next?”

They suggest he stop piddling around and throw himself into a Big Year. (In birding terms: an informal competition to see how many birds a person can identify, by sight or sound, within a 12-month period and a set geographical region).

Unconvinced, Hayward books a flight. Then another. He chases sightings from Miami to Southern California, in a competition against time, other birders, and the dark spells he comes to recognizes as depression. Low points – sleeping in cars, avoiding airplane small talk, self-doubting his abilities – shrink in importance whenever a new bird is discovered.

Out of these meanderings grow hope, and a list of birds that just might beat the current Big Year record.

Maybe that was the biggest discovery of the Big Year: that there are no simple answers in life, no guarantees, no right paths, and that that’s okay.

All across, up and down some of the United States’ more remote and unknown locations; the Aleutian islands; British Columbia, Quebec, Nova Scotia and Newfoundland, Canada.

By combining a not-so-common interest with one very common stage of life, Hayward creates a journey that is both relatable and intriguing. His ability to describe places and birds with unpretentious wit loosed many snorts from my nose (a compliment not shared easily, I promise).

Each chapter, or month, circles back to an updated summary of his ongoing thoughts and concerns. While this became a tad repetitive, it took up such a physically small square of the book that it didn’t deter from the speedy pace of Hayward’s development.

And because the author doesn’t seem to know his own mind throughout the Big Year, he avoids self-righteous preaching. What’s left is a story about being lost, which never loses the reader. By the end of the book, I hope you feel as upbeat about the future as I did.

After all, if he can stumble into, survive and grow out of a massive 12-month adventure, why can’t we?

Have you read this book? What did you think?

3 responses to “Lost Among The Birds (A Travel Book Review)”