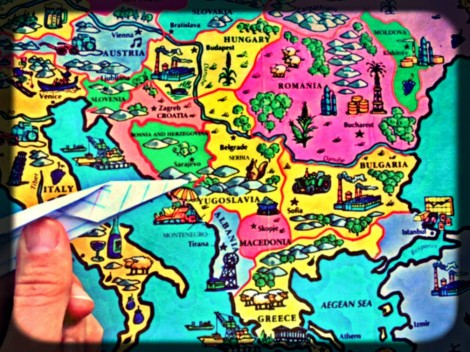 Sometimes, I feel like the world didn’t really begin until 1985.

Because the things that burst out of this era (DNA fingerprinting, camcorders, Apple computers – and yes, yours truly) would forever change the way we understood and moved through our surroundings. (Just to be clear: Apple computers had a much bigger impact than my birth did).

By the 1990s, more than Berlin’s cement walls had come down. Names changed and borders moved; Yugoslavia, the USSR and Pan Am Airlines said goodbye forever; improvements in air travel made Australia a tempting destination; and the creation of music videos (cheers, MTV) brought foreign scenes, like Bangkok and Kilimanjaro, straight into our living rooms.

So pop your collar and grab your passport – this 80s travel playlist is going back to a time when everybody was working for the weekend, and girls really did just wanna have fun …

Road to Nowhere – Talking Heads (1985) – David Byrne once said that the song’s choral introduction was a last-minute add-on, but it’s the most stirring part: “And the future is certain / Give us time to work it out.”

Holiday – Madonna (1983) – You had to expect this one on this list. So does it matter if she’s only singing about a single day off work? Take all the time you need to drop your troubles and celebrate.

Tarzan Boy – Baltimora (1985) – “Jungle life / I’m living in the open / Native beat that carries on.” A drum-and-chant tune that, even if it’s not authentically African, at least sounds like life in another world.

Under Pressure – David Bowie & Queen (1982) – Unarguably one of the greatest song collaborations of the 80s, “Pressure” brings Bowie & Queen together in lyrical protest. “Why can’t we give love that one more chance,” escape from the routine and live contentedly?

I Go To Extremes – Billy Joel (1989) – “Clear as a crystal, sharp as a knife / I feel like I’m in the prime of my life.” Don’t worry about the judgement of others; folks might not always respect your restless feet, but they can’t stop you from moving.

Wide Open Road – The Triffids (1986) – If anyone understood an endless horizon, it’d be a band from the expansive (and mostly empty) Western Australia. But wide open roads can be a bad thing when you’re chasing after someone you love …

Human League – Together In Electric Dreams (1984) – Have you ever had a romance on the road, one that exists forever in a specific location in your mind? Sometimes, memories are the best souvenirs. “We’ll always be together / However far it seems / (Love never ends).”

Hungry Heart – Bruce Springsteen (1980) – “Like a river that don’t know where it’s flowing / I took a wrong turn and I just kept going.” According to The Boss, everybody’s heart hungers for belonging. Haven’t found that yet? Keep looking.

Dignity – Deacon Blue (1987) – Dignity, in this song, isn’t just the name of a boat, but a lifetime of hard work traded in for a final escape. “I’ll be on my holidays / They’ll be doing their rounds / They’ll ask me how I got her I’ll say ‘I saved my money’ …”

The Whole Of The Moon – The Waterboys (1985) – “I spoke about wings / You just flew.” A heartfelt comparison between the one who can’t see beyond the front door, and the one who’s already gone away.

Land Down Under – Men At Work (1980) – The classic breakout from an Aussie band that had listeners wondering what Kombi and chunder meant.

Love Train – Hall & Oates (1989) – Mullets and mustaches! They may be remaking a piece of 70s soul, but at least they look good. “People all over the world / Join hands / Start a love train, love train.” *Unfortunately, this song isn’t currently on Spotify.*

Six Months In A Leaky Boat – Split Enz (1982) – Before they became 80s hit duo Crowded House, these Kiwi brothers were singing about a hypothetical boat trip from New Zealand’s distant islands. “There’s a world to explore, tales to tell back on shore.”

Your Wildest Dreams – The Moody Blues (1986) –  Like a fairy tale. “Once upon a time … Once the world was new,” and you could give your heart openly, unconcerned with the geographical distance tomorrow might bring.

Africa – Toto (1982) – Any song that features a spinning globe and passport stamps in its music video is probably worth mention. Gentle harmonies, generic African references and a mean keyboard solo add to the overall travel vibe.

Kokomo – The Beach Boys (1988) – Originally produced for the movie “Cocktail” (picture a young Tom Cruise in flowered shirts), this song lists a bunch of tropical destinations – all of them real, except for the one “Off the Florida Keys, there’s a place called Kokomo.”

Graceland – Paul Simon (1986) – Our playlist winds down with an ode by America’s ultimate musical poet. “There is a girl in New York City / Who calls herself the human trampoline / And sometimes when I’m falling, flying / Or tumbling in turmoil I say / ‘Oh, so this is what she means.'” No matter what Graceland you’re searching for, embrace every up and down on the journey.

End Of The Line – Traveling Wilburys (1989) – Rock legends George Harrison, Jeff Lynne, Roy Orbison, Bob Dylan and Tom Petty came together for two volumes of music that’s been described as ‘a message that travels.’ Take it where you will.

Back In The High Life Again – Steve Winwood (1986) –  To sum it all up: “But when you’re born to run it’s so hard to just slow down / So don’t be surprised to see me back in that bright part of town.”

*BONUS TRACK* Promise Of A New Day – Paula Abdul (1991) – An upbeat send-off from an 80s dance diva, promising that no matter what the year (or travel route), the future should always arrive with optimism.

What songs are on your 80s travel playlist?

If you’re craving more musical flashbacks, listen to where the 1970s took us!