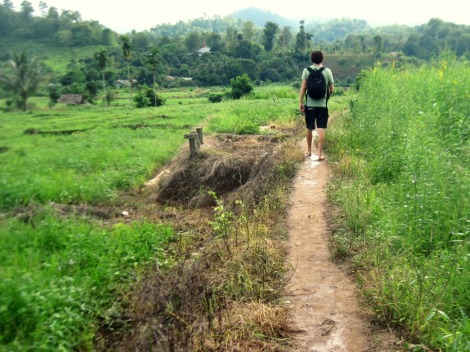 Few things seem to disappear faster than an unmarked dirt path, a yearly holiday, or the month of February.

One minute you’re looking at the brilliant unknown ahead, the next you’re mumbling “Where did it go?” and sullenly wondering when the next track, vacation or new year will come around.

Quick, before you fall into the same trap – watch at least one of these travel movies and remember just how overwhelmingly freeing a new beginning can be.

Alice’s erratic, spontaneous behavior looks so unnatural to the average adult, it turns this plot from simple drama into teasing thriller.

For the past twenty years, Jenny has changed and dropped identities like clothing at the end of a day. After touring as a magician’s assistant in China and working as a biologist in Tasmania, she appears at a friend’s party in New York City. Her dramatic return to ‘real’ life will deeply challenge your own sense of being.

Voiced over with typical British dryness, Shirley is the first-person telling of a daydream escape story.

When Mrs. V accepts an invite to a girlfriend’s getaway in Greece, she realizes how many things a middle-aged woman should not do.

But, encouraged by a local fisherman and her own inner strength, this unlikely heroine finally asks the question, “What do I want to do?”

A small provincial town isn’t always the best place for a new beginning, as Vianne learns soon after she and her young daughter appear in Lansquenet-sous-Tannes, France. The nomadic duo wish only to create a sense of home; but, as local suspicion and gossip soon prove, no person exists without a past.

Vianne must use her culinary talents and magical intuition to win over the neighbors – without ruining the careful balance of their community.

Who says second chances are only reserved for mid-life crises? These septuagenarians and grandparents definitely need new opportunities from their health care, relationships, savings funds.

Strangers until they meet at a British airport, the typecast yet endearing group of characters must learn how to start over at a retirement hotel in India. Romances, scandals and discoveries support a movingly honest narration on travel in new places.

The real act of slate-wiping isn’t always glamorous, but a desperate grasp at survival. For Kurdish asylum seeker Bilal, Europe marks his flight from the terrors in Iraq.

He’s determined to find his girlfriend in England – even if it means illegally swimming the English Channel, first. With the help of a French swim instructor, two men will question how much love motivates us to move forward.

The Italian version of a woman trapped in domesticity; but this time, she’s not the one doing the leaving. Instead, her husband boards a tourist bus and doesn’t notice she’s missing. Disarmingly forgotten, Rosalba has two choices: chase the old life or seek out the new.

So she hitchhikes to Venice, where a crew of unintentionally comic interlopers – including a detective sent by the manipulative husband – help her discover freedom in her wide-open future.

Finally, a clever romantic storyline with a male in the role of daydreaming escape artist. Gil is clearly about to marry the wrong woman, until a mysterious midnight cab carries him to a bar – and the 1920s. Returning each night to drink with Hemingway and dance to Porter, the bumbling writer quickly gains inspiration for a novel, as well as his love life.

But instead of handing viewers an obvious happy ending, director Woody Allen lets us wonder which era Gil will choose to stay in.

Audrey Hepburn’s performance as crass-talking Cockney flower seller, Eliza, remains a classic example of the ultimate new woman. After a dashing linguist discovers her on a corner and makes a bet to improve her English, she finds herself with a new home, new wardrobe and even new manners.

What’s your favorite travel movie about a new beginning?

All photos taken from Creative Commons and Wikipedia (Fair Use).